This week, Theatre Glendon’s production of Spring Awakening hit the stage!  Spring Awakening is a rock musical with music by Duncan Sheik and a book and lyrics by Steven Sater. It’s based on the German play Spring Awakening (1891) by Frank Wedekind. Set in late-19th century Germany, the musical tells the story of teenagers discovering the inner and outer tumult of sexuality.

Let me just start off by saying, Spring Awakening is one of my all time favourite musicals.  I was introduced to the show in High School when we sang I Believe for Jazz Choir.  I fell in love with the song, started listening to the soundtrack and found a bootleg version of the original production with Lea Michele and Jonathan Groff on YouTube.  The rest, as they say, is history. When I heard that Theatre Glendon was doing a production of the show, and my friend Ritchie was part of it, I was excited.

I got to see the show on Tuesday, an advanced viewing for groups that were promoting the show.  When I arrived at the theatre, many members of all of the invited teams were present.  As I read the programme, I realized that I knew most of the people involved with the production, which made me even more excited for the show to start.  The lights dimmed, the violin started and Wendla came on to stage.  The moment the first note left her mouth was breathtaking.  I admit, I teared up.  The casting choices were outstanding.  The actors and actresses had the passion, both in their singing and speaking voices, that really made the characters come alive.  Throughout the entire show I was either laughing, crying, had shivers from their beautiful voices, or had a combination of the three.

After the show, I caught up with Gillian Murphy aka Director Extraordinaire, and Alexander Ritchie aka Moritz Stiefel to ask them some questions about Theatre Glendon so I could share some insights with you.

Congratulations to the whole cast and crew for a fantastic production.  I wish that I could have seen it every day for the whole run.  I am so happy that Theatre GL decided to do a production of Spring Awakening! Seeing it was one of the highlights of my year so far.

Song of the Week:
I can’t choose my favourite song from the show, so here’s the opening song and you can listen to the rest of the soundtrack on this youtube channel.
Mama Who Bore Me – Spring Awakening Original Cast (Lea Michele) 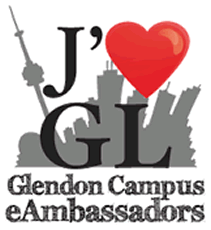